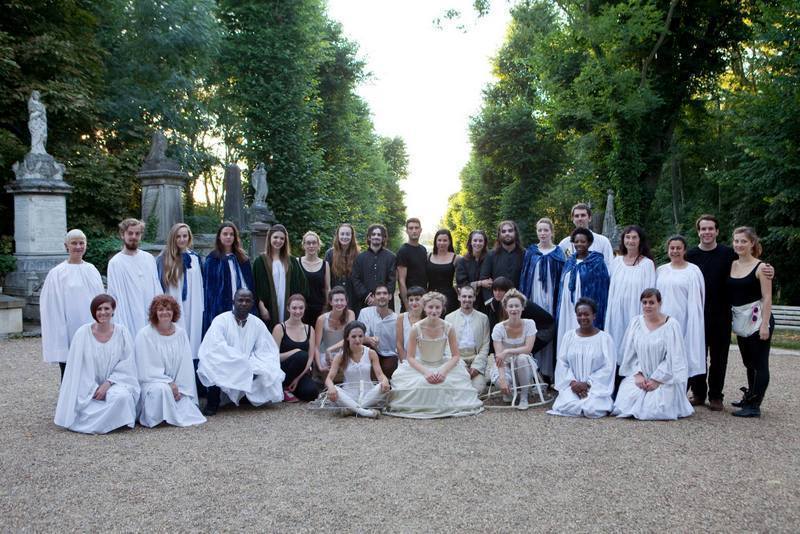 Cast & Team of Biped's Monitor at the Nunhead Cemetery
We went to see the performance Biped's Monitor 2013 by Arbonauts last month, a unique site-based theatrical experience merging highly-visual, surreal environments with an ethereal operatic score. The audience are invited to wander in the Nunhead Cemetery, and performers and installations are scattered around the venue.
It was an enjoyable evening and offer a freer experience than the traditional theatre performances, though the show depends heavily on the weather in an open venue, and fortunately most of the time it wasn't raining. Without much prior knowledge to The Baron in the Trees by Italo Calvino, it is a little difficult to comprehend the whole story line. However for a contemporary production, one could argue sometimes it is left for the audience's imagination.
In an environment which allows the audience to freely roam, it is always a challenge to the producer of the show to choreograph scenes which could direct the audience in sequence of thoughts, and the same for the performers to interact with the audience to deliver the message in the manner they wish.
The following is an interview with Dimitri Launder, co-founder of Arbonauts, to share with us a few thoughts for the show and beyond.

Q1: What are the motivations for you & Helen to found Arbonauts? What does the name mean?

DL: Helen and I created Arbonauts out of a mutual passion for creating live performance and installation. We are inspired by site and text - language and location ~ the initial spark for a performance often starts in reading a surreal text and then as velocity builds around a specific idea we look for a  suitable location. The name Arbonauts came about in a similar way, we enjoy its relationship to cultural explorers, sailors in a surreal sea. 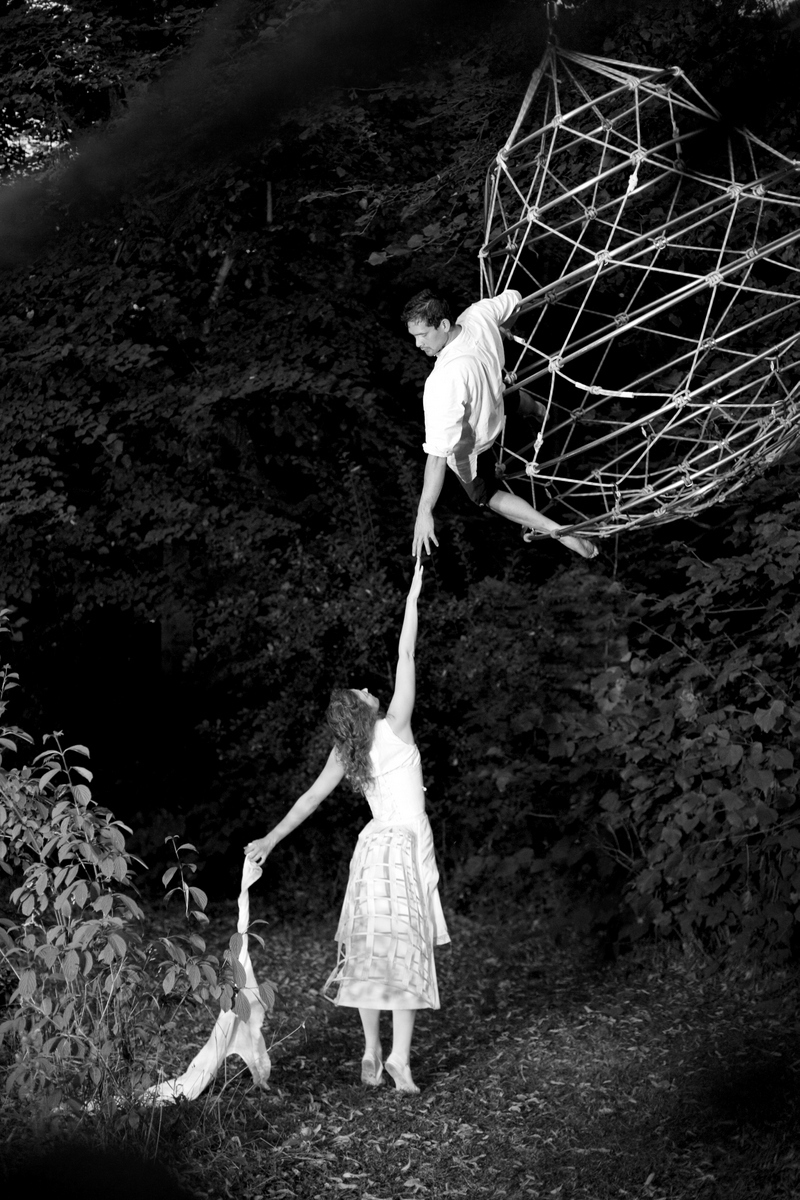 Q2: How did Biped's Monitor start? (or whose idea was that?) And why the Nunhead Cemetery was picked as the performance venue?

DL: Biped's Monitor began by reading Italo Calvino's 'Il Barone Rampante'  - we both fell in love with the structure of the text: the tension between society and nature. Taking inspiration from Calvino's text Helen realized that the title of the Baron's Diary/Manifesto of Arboria 'Biped's Monitor' would be the perfect title for our performance. We wanted to form our abstracted characters from the perspective of the Baron, his surreal narrative memories of his family and lovers. We were drawn towards the romance of the location ~ the stunning Nunhead Cemetery that was left disused for several decades allowing nature to establish itself in the middle of our urban sprawl. Additionally the collaborative space between physical theatre, installation, opera and dance are essential to the transformative process we hope to raise in our audience. 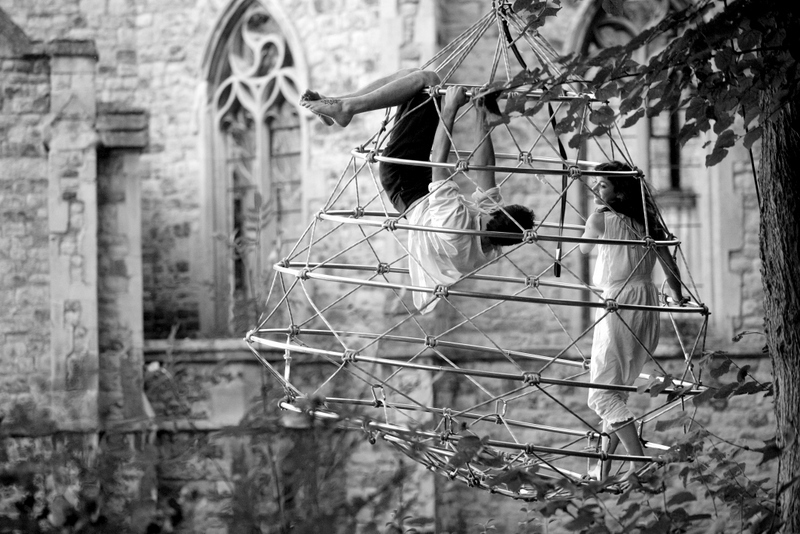 Q3: How long did it take to produce the show (from concept to realisation)? Could you share with us what are the main challenges in this production?
DL: We spent over 6 months independently negotiating the permissions to use one of London's Magnificent Seven Cemeteries at dusk. Rehearsals with our amazingly committed core cast of 11 began 2 months before. With the additional 20+ cast and crew, including our choir drawn from the local community, we began work a few weeks in advance of being live on site. Helen and I also work closely with composers Louise Drewett and Alex Nikipoenko and soloist Daisy Chute to create specially commissioned works such as Aria Arboria based on a text by William Blake 'Love and Harmony'. We are so grateful to the Mayors Fund for believing in us ~ without their support we would not have been able create this event. 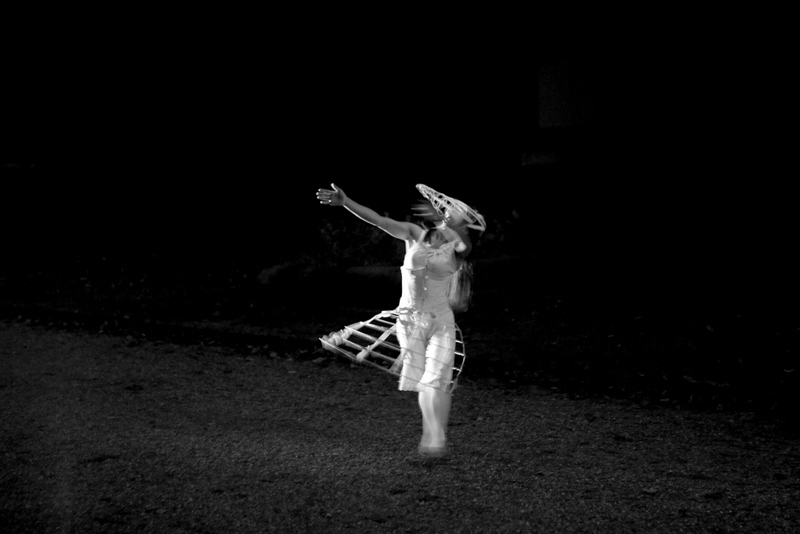 Q4: What is the most memorable moment in the show to you?

DL:  One night as the performance concluded and the cast revealed their skeletal beaks, Daisy Chute's mezzo soprano voice rose into the darkening sky (the disused chapel has no roof) and a light summer rain started. Sublime... That and selling out all our available tickets the weekend before we went live!
video link
Q5: The show was pretty much free from digital components despite the interactive nature with the audience. Is that a deliberate decision or just unnecessary? Would you consider in future to use digital components for similar performances?

DL: We aimed to make this piece with as light a footprint as possible, for instance we took advice on sustainable practice from Julie's Bicycle. We felt that there are threads in the narrative that we wanted to explore with the audience like dwelling in and with natural phenomena and physical experiences/memories. We have no issues with using technology in the future... without giving too much away we are developing a new piece called The Desire Machine. 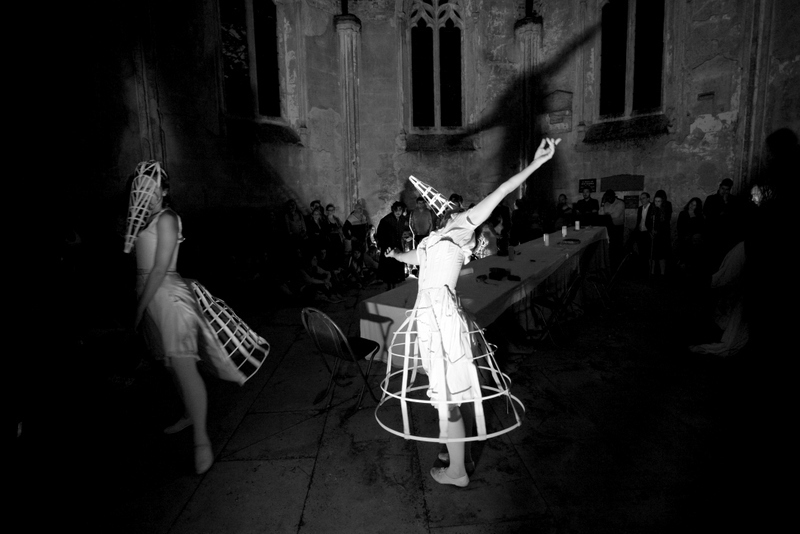 Q6: Any plans for re-run? And what would be next for Arbonauts?

DL: We are looking for new opportunities at the moment for Biped's Monitor -  new sites / commission are on the horizon. Over the next year we are keen to develop a new project The Desire Machine - a darker and more visceral performance exploring voyeurism, illusion and desire. We are hoping to R&D it this winter - please do check out our website www.arbonauts.org or follow us on twitter @ARBONAUTS for any developments on the piece. Additionally, for 2014 we are hoping to work alongside both The National Trust and The William Blake Society on new, outdoor performances.We are always keen to hear from potential partners and producers, or people with unique and exciting spaces.
*****
Further Readings -
Page: Official page for Biped's Monitor 2013
Page: Surreal World by Emma de Angelis, 25.08.2013
Review: by Hannah Elsy for A Younger Theatre, 29.08.2013