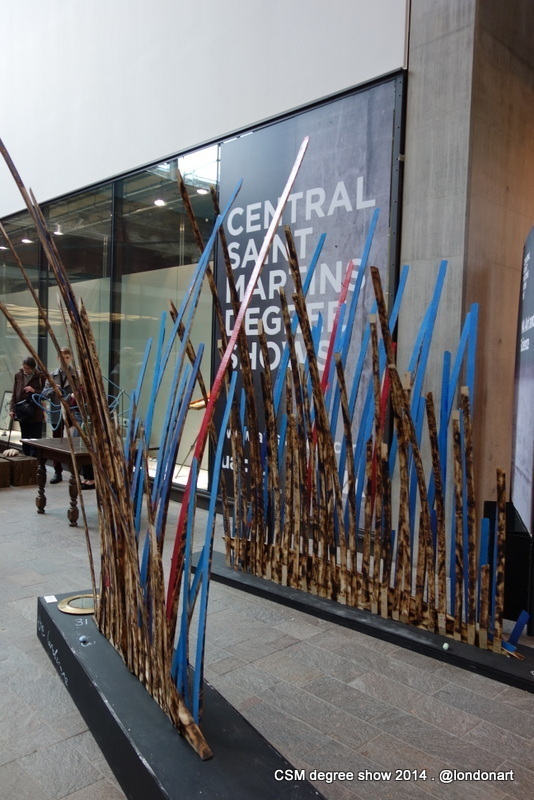 The annual degree show season has started, it's time to go spot the next super star graduates before they get affiliated with the noble house galleries.

We walked through CSM's show last weekend and found the works this year are as controversial as usual, although one would wonder how the visitors could understand the student's intention without their presence or any explanatory note most of the times. Or do they believe only the VIPs in private view evenings are worth their dedication and the general public should only appreciate their works by second guesses? It is puzzling that some artists still behave like this, and complain about nobody paying attention to their works when people give up their valuable weekend time to go see their works. We can perhaps only wish this 'tradition' would gradually change. 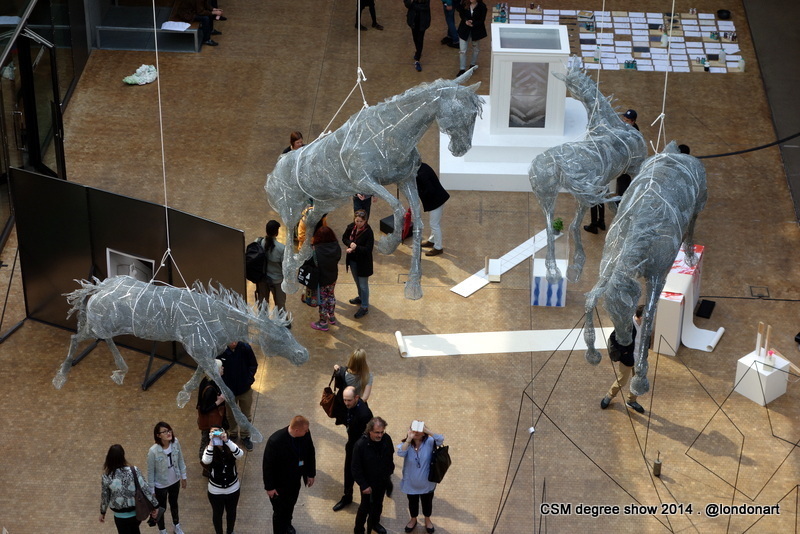 Here we are going to showcase a few highlights we found in the show, in no particular order and of no particular reason, since we are simply applying the same tactics as the students that do not present their works with their concepts - 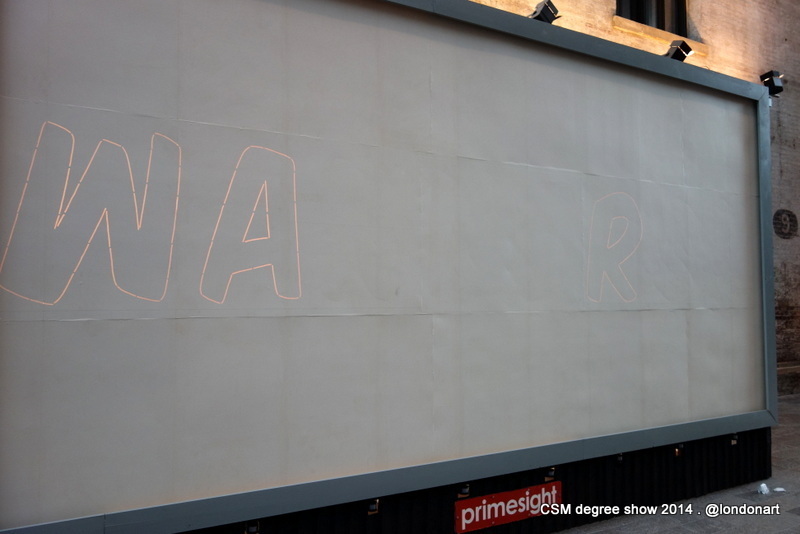 2five8's installation '48 sheets' is a billboard controlled by motion sensors. The message is revealed when you walk across in front of the board.

'four letter words' by Claudia Klaus Rowland. Claudia left a comment on the vimeo page to explain her concept - please spend a minute to go read her words. 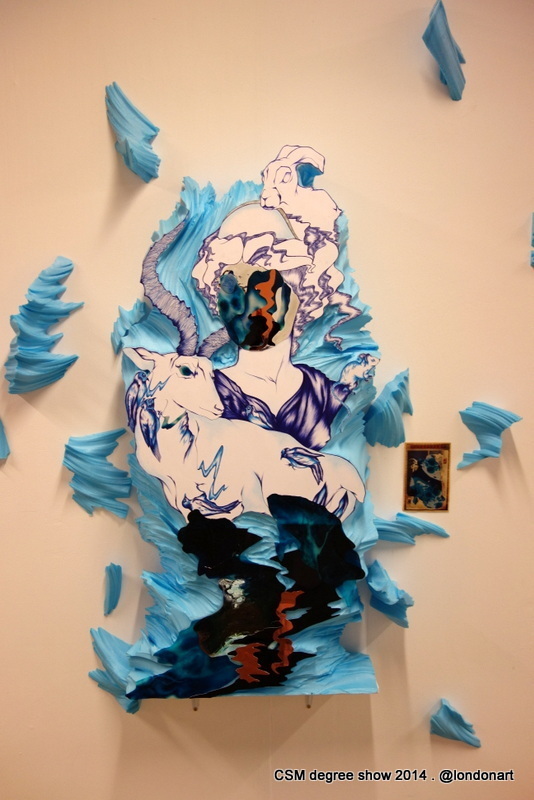 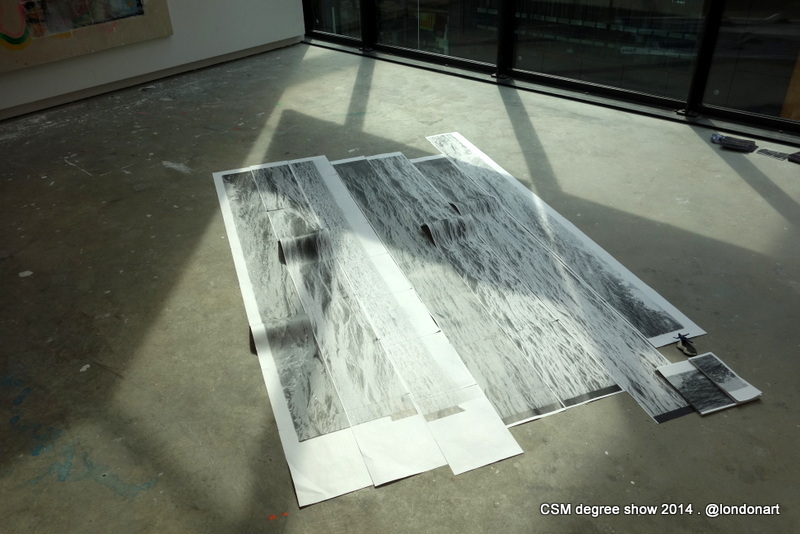 Christina-Shelagh Mongelli's Gulf Prokupkin. There is a blue soldier that is en-gulfed by the black and white sea, suggesting a movement thats prone to fail as he is stuck on a rock. A rock that used to be close to the sea, a closeness suggested by its wavy shape. Yet their closeness is a reactionary one, as there is a 'gulf' between them.  An unbridgeable disparity, due to the lack of understanding. 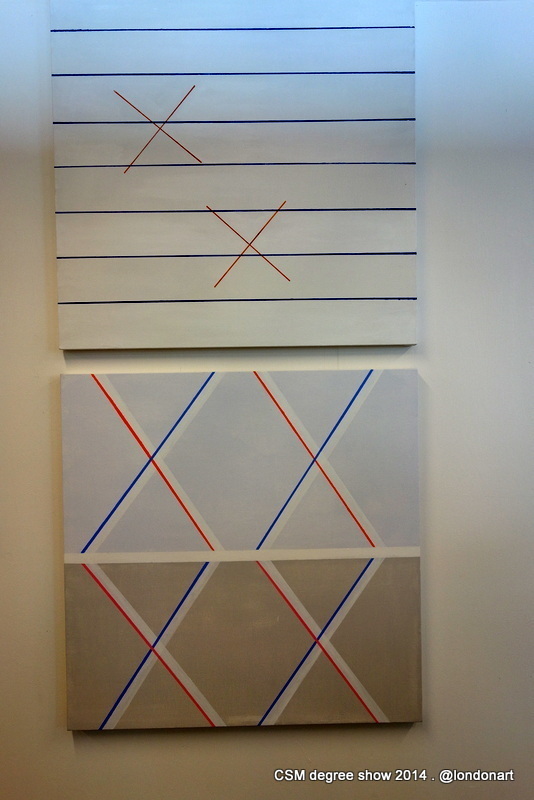 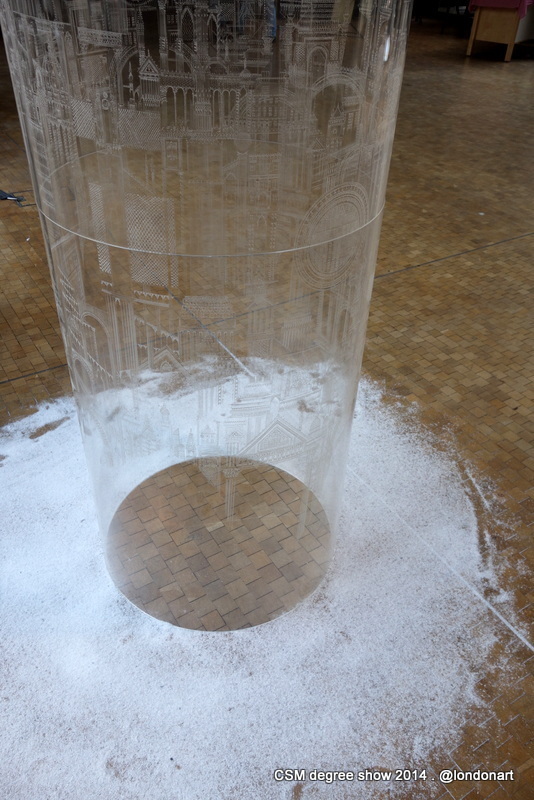 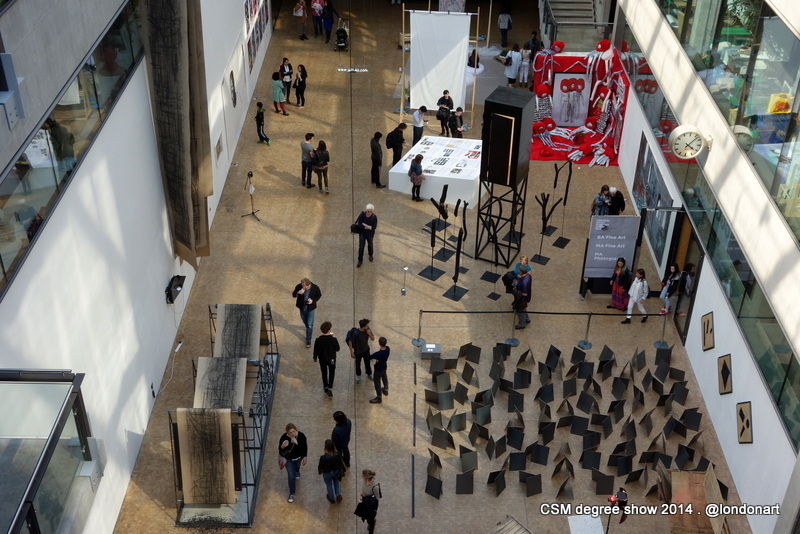 Kristian Kragelund's 220 pieces of steel forming some 70 leaning figures under the sun - he told us that the heat in a certain time of the day from the direct sunlight would make the sheets expand and adjust their balanced positions. Very interesting fact and hope there would be a time-lapsed video to reveal this happening 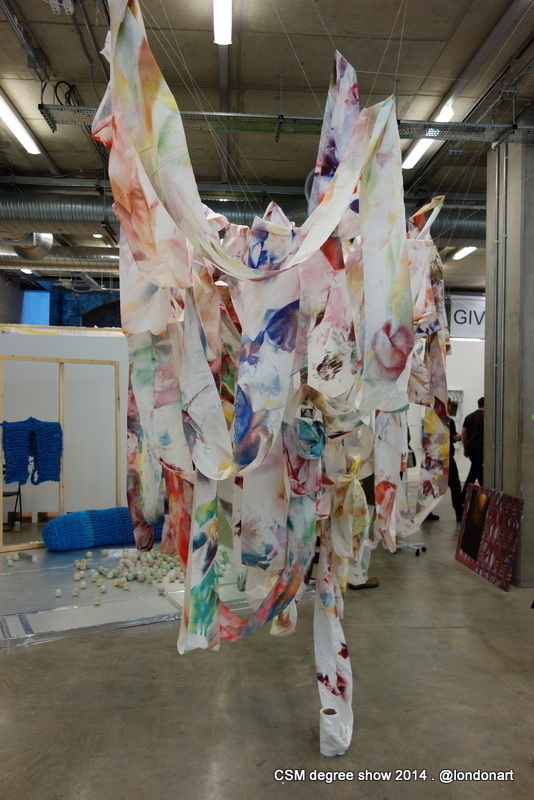 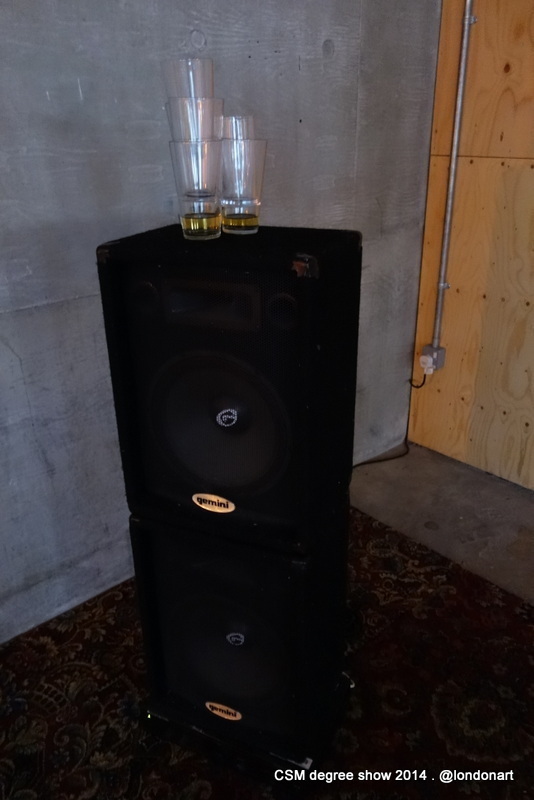 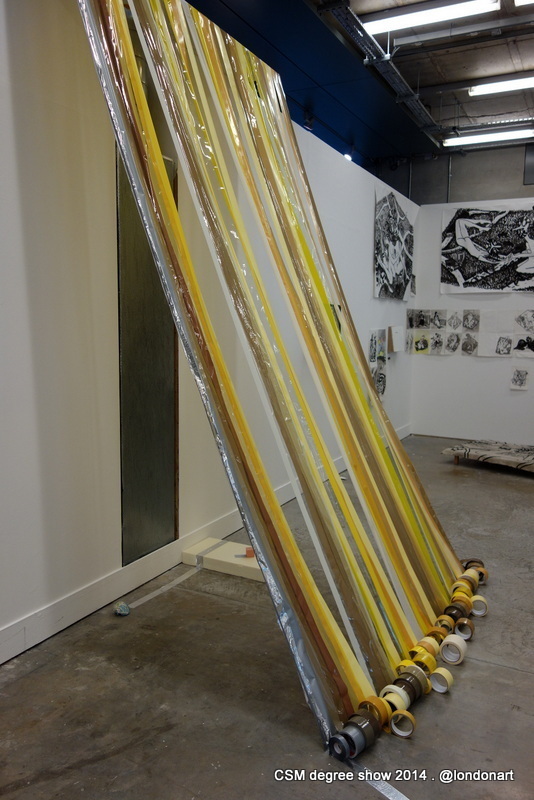 Another visually stunning piece made by simple daily objects. by Majella Dowdican 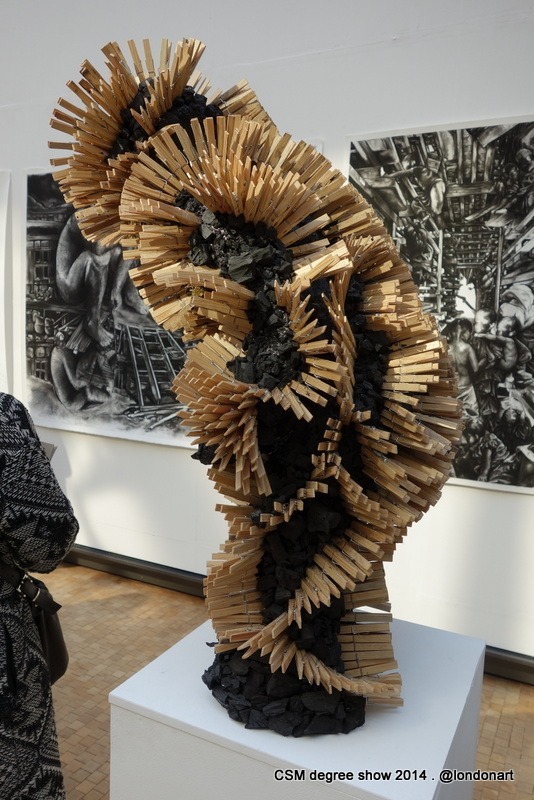 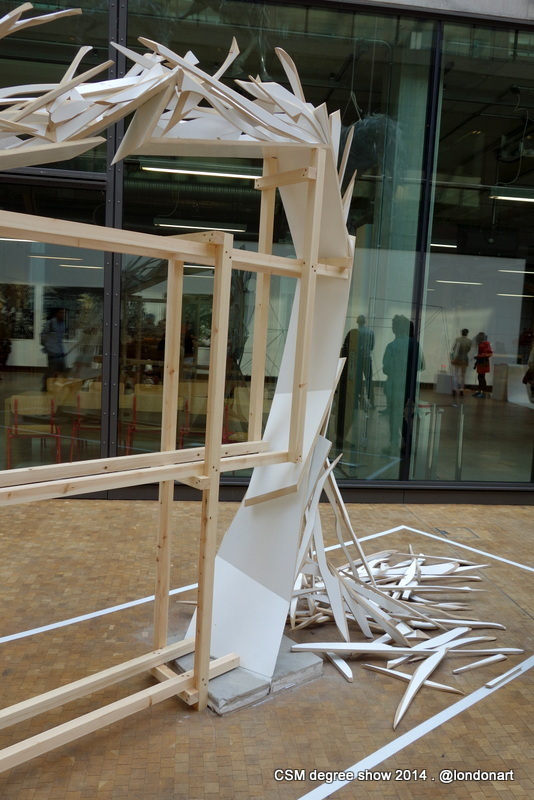 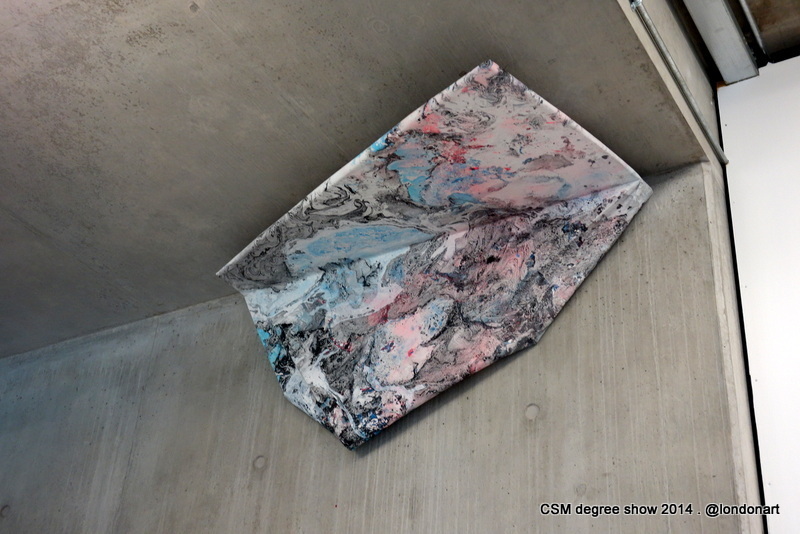 Last, we also like Sarah Jacqueline Hamilton's Mount Me which you would see a person climbing up a pile of foam when you put your eyes into the viewfinder - it's a pity that cannot be captured and reproduced here.