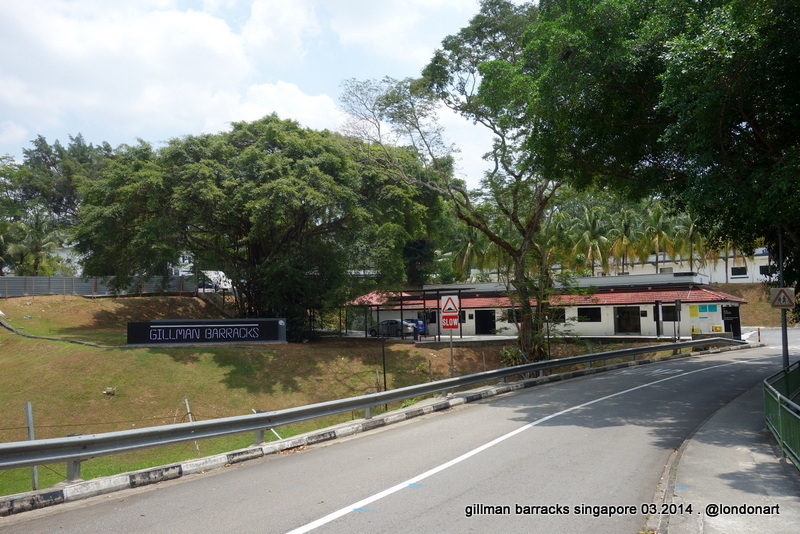 Earlier this month, we have the opportunity to visit Gillman Barracks, an ex-british army  barracks tranformed into a home for many galleries, local and international.

The barracks is located in the fringe of the city centre, with an interesting mix around - business parks, starchitect residential development, academy of teachers as well as golf course. It is an initiative the Singaporean government create in the hope of competing with Hong Kong, Dubai and the likes to be the art hub of Asia. 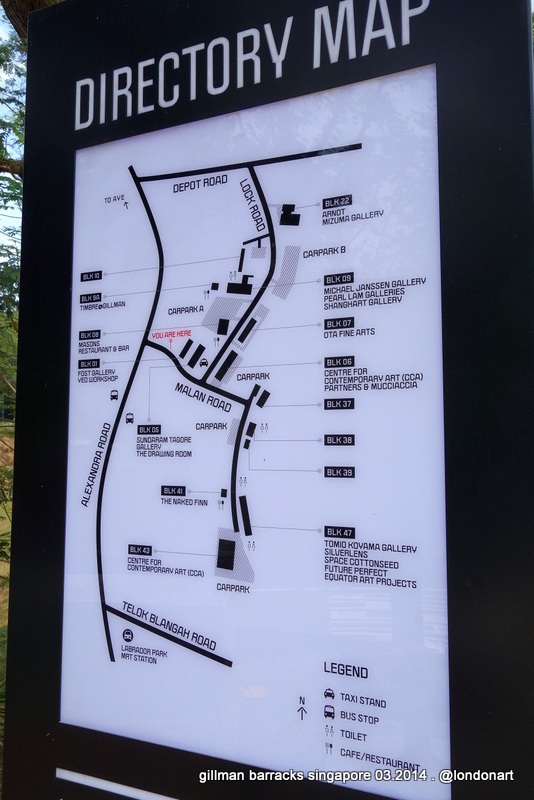 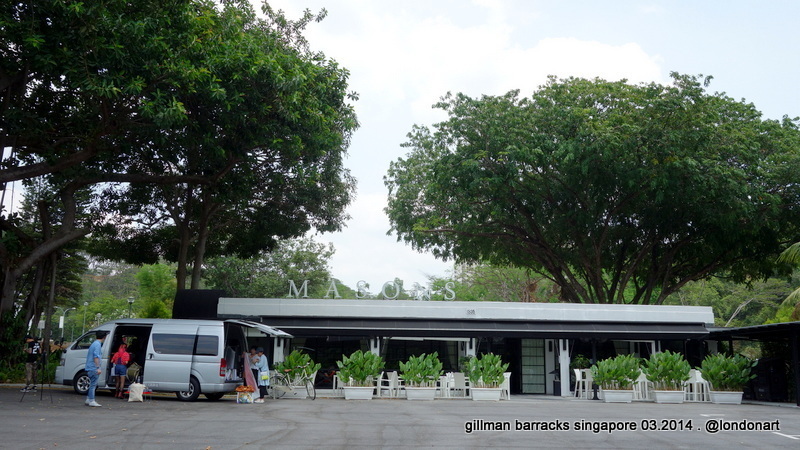 At the time of visit, a few galleries were showing works by Indonesian artists, which could be seen as a dominant emerging force in the whole South East Asian art scene given the rise of the country with 250-million population.

Michael Janssen was showing Indonesian artist Eddy Susanto's "Albrecht Dürer and the Old Testament of Java" in the gallery. Originally a graphic manifestation of Old Testament texts that were written in Hebrew, Dürer's images are recreated in Susanto's paintings with their outlines in Javanese script. This script, which the artist painstakingly wrote by hand with black ink pen, consists of the entire Old Testament, translated into the Javanese language. 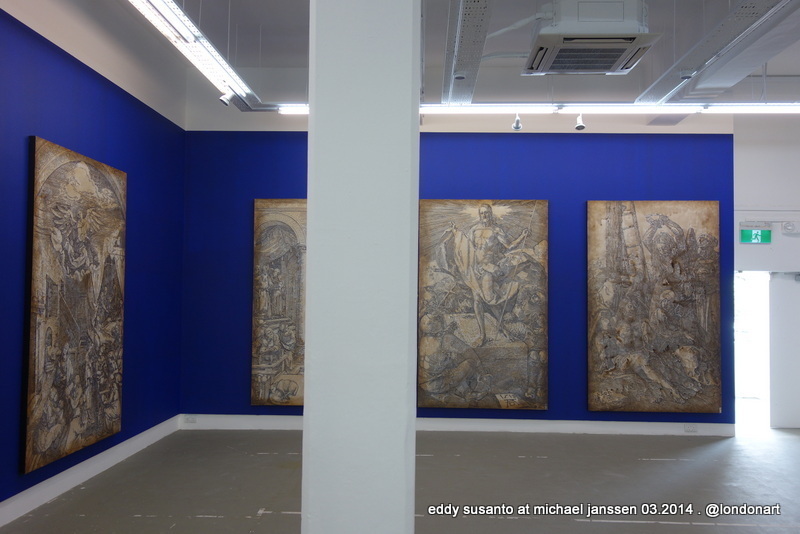 In Equator Art Projects, we saw another Indonesian artist Yuli Prayitno's first solo show in the city - "Unity in Diversity: Archaeologic Excavation of the Peranakan Tionghua". The artist recovers examples of Pernanakan cultural artifacts, which he 'excavates' from dilapidated Peranankan houses. The objects, primarily pieces of furniture, porcelain and Chinese texts, are re-interpreted by the artist. In doing so, the artist makes visible the lost knowledge and wisdom of the Peranakan Chinese as a community, who form a part of Indonesia’s cultural diversity. It reminds us of Simon Fujiwara although Yuli's works are not autobiographical to himself. The fact that a native Indonesian artist dedicates his artist creation to embrace the existence of chinese culture in a country which citizens have not been always friendly with the Chinese community means perhaps the new generation has come out of the shadows of their parents. Or it could perhaps also be the fact that most artists' patrons afterall are the wealthy Chinese descendents in the region? 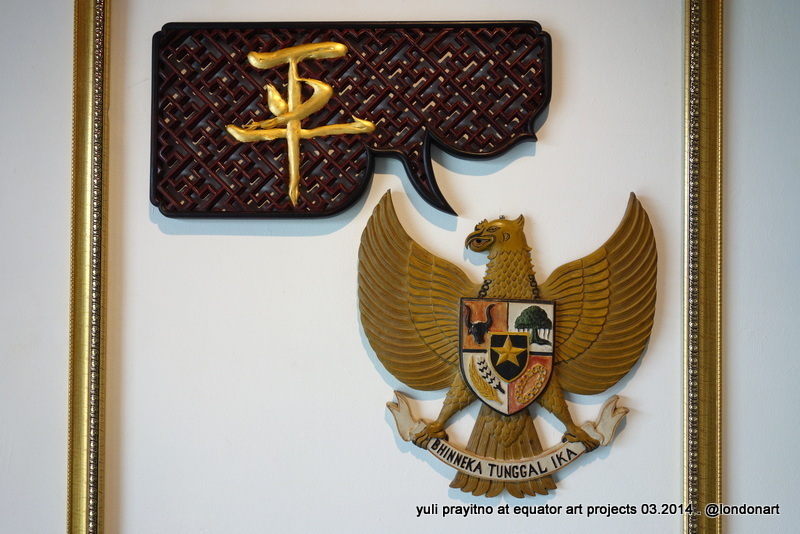 A unconventional show was up in Mizuma gallery with Indonesian artist Angki Purbandono showcasing 25 artworks made out of 78 scanographies featuring his 10-month stay in the Yogyakarta Narcotics Penitentiary, with the help of 20 other inmates who took part in the set up of the Prison Art Programs (PAPs) in May 2013. Although the works on the wall are shot by Angki, the contents are actually artistic creations of the prisoners. 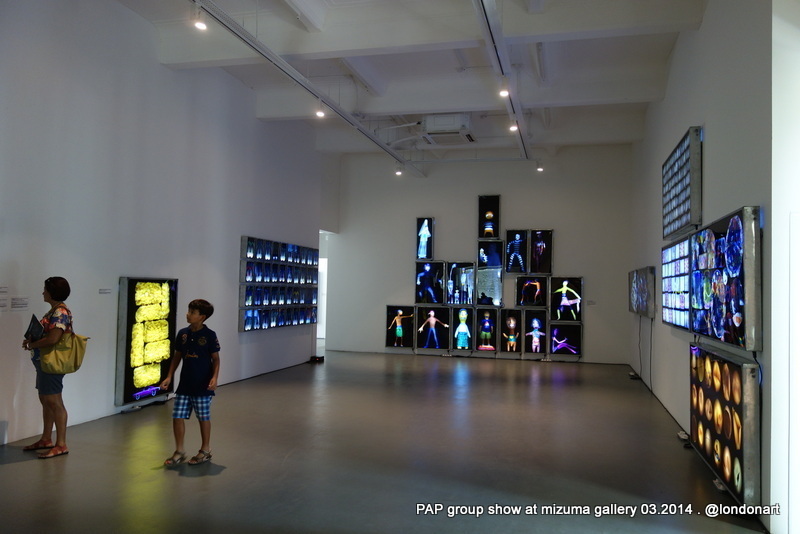 Next door at Arndt gallery, there is a solo show "Triology" of Entang Wiharso, one of the most significant and internationally acknowledged Indonesian artists working in SE Asia today for his large scale paintings, wall sculptures and installations. His works have been exhibited extensively in various contexts: gallery shows, public and private collections displays as well as biennales and group shows in Indonesia and abroad. 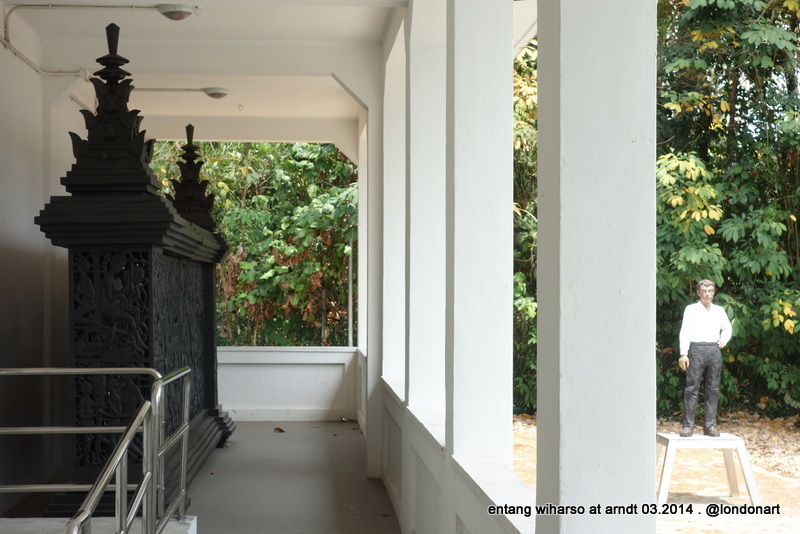 Other galleries were showing works by local artists and across the world but mainly in the region.

Fost Gallery was hosting Singaporean artist Heman Chong's solo show 'Of Indefinite Time or Occurence'. In his works, Heman investigates the relationships between image and text, examining how one is intrinsically linked to the other in his idiosyncratic manner of generating fictional narratives. 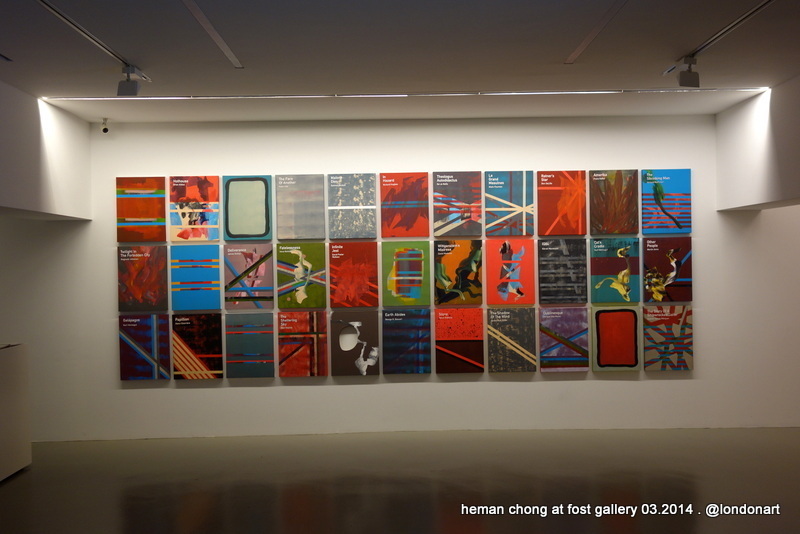 Pearl Lam, one of the most influential buyers in contemporary abstract art, has a debut group show in her singapore gallery curated by Philip Dodd. In his own words about the exhibition, "First, this exhibition seems to me to follow on from the groundbreaking exhibition that inaugurated Pearl Lam’s Hong Kong gallery, Chinese Contemporary Abstract, 1980s until Present: MINDMAP. If that exhibition revealed just how various and strong abstract art in China has been since the 1970s, this much more modest exhibition explores what abstract artists from around the world have in common and what is it about their cultural location that makes them distinctive. In itself, this exhibition reflects a decentred art world." 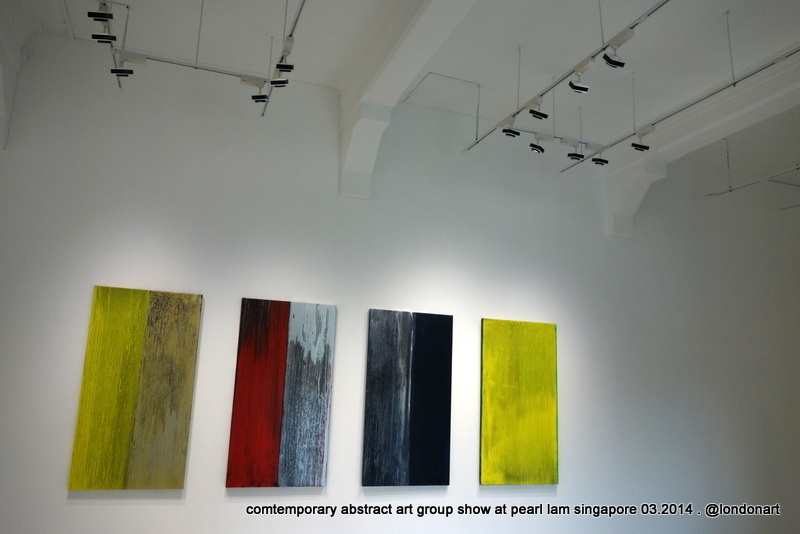 In Space Cottonseed, we found Singapore-based Korean artist Lee Young Rim's site-specific "sculpture-paintings" challenging the audience's perception of "pictorial vs physical realms". Her show "Cutting into space" literally insert works into the gallery space, and together with the gallery's house-within-a-house interiors (which reminds us of Dover Street Market), create the most fulfilling spatial experience in our visit of the Barracks on that day. 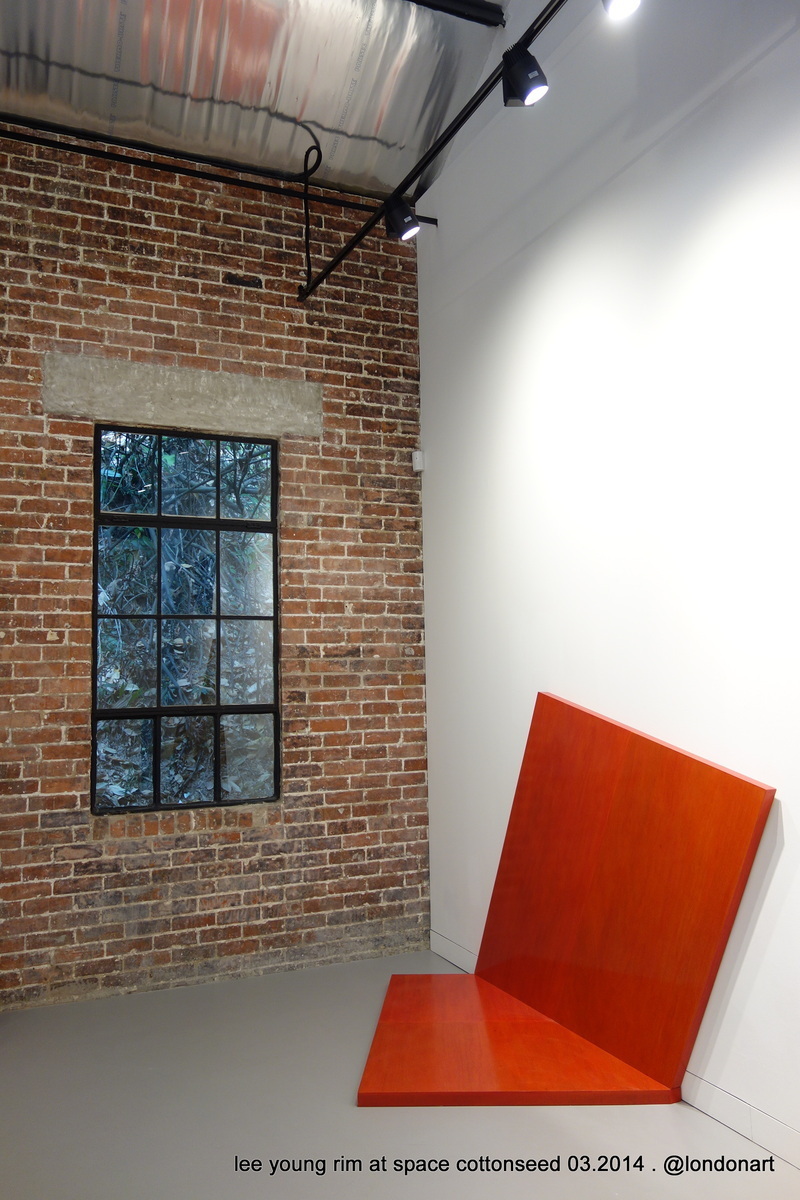 Filipino artist Diokno Pasilan has a fascinating show in The Drawing Room. In 1998, after a four-year stint as the residency coordinator for the Australian Centre in Manila, Diokno moved to Perth. Living in Australia and finding objects made in local wood redefined his art practice. From there he rebuilt his personal history, autopiloting creations that take the image of boats.  This exercise in memory and association comes into play in the exhibition "S/V Locomote". As an international maritime prefix, “S/V” stands for “sailing vessel” while “locomote” adds to the essence of all boats – that they are made to proceed and eventually, to return. Also in the show is a series of paintings “Kinalawang na Larawan” (translated as corroded images) where he forms portraits out of iron dust. 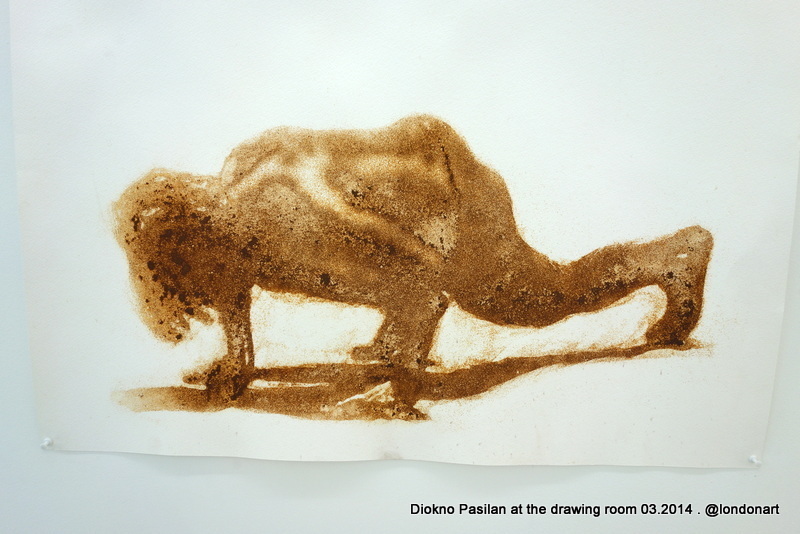 Future Perfect was showing Turner Prize nominee Nathan Coley. The Scottish artist's first solo show in SE Asia brings together photographic and sculptural work from the past five years, the exhibition complements Coley’s representation in the current Biennale of Sydney. 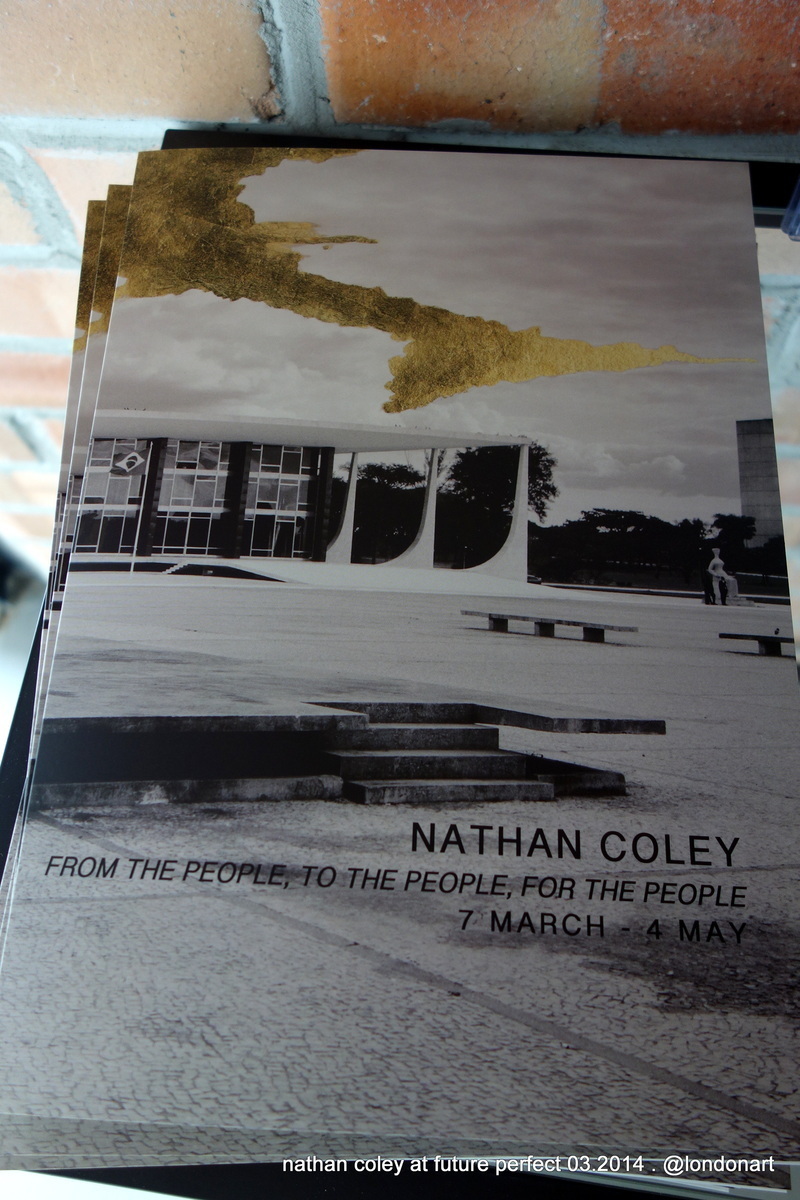 We found London-grown artist Christopher Kulendran Thomas' works were shown in Yeo Workshop. The show was his first show in Asia, collaborating with Annika Kuhlmann, manipulated the processes through which art is distributed in order to set in motion the mechanisms of social change. 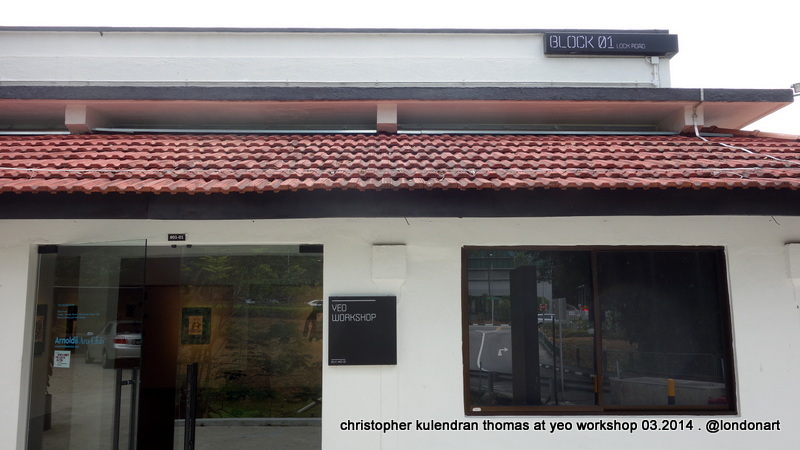 In many of these shows, we see a common theme - to seek artistic inspirations from one's cultural roots. While the more prominent market places are trading big labels with global appeal, Gillman Barracks has a feel of a little enclave with interesting treasures awaiting your discovery. We hope there would be more joint efforts from the galleries to promote the place and attract more art lovers from the city and afar to visit.