The london art scene is always in transition. Galleries move around all the time, with new comers gathering in crowd where the affordable rent or new vibe is. Victoria Miro, the gallery which opens its Angel space in 2006 has recently returned to Mayfair, springing up a new venue with a Yayoi Kusama show in time for Frieze Art Fair. On the otherside of the river Hannah Barry is opening a new space right next to the Peckham Rye station, with performance by Tom Barnett for his solo show.

White Infinity Nets by Yayoi Kusama
Victoria Miro Mayfair
18.10-16.11.2013
The first Infinity Nets Kusama produced in the 1950s and 60s were white although she subsequently also made coloured net paintings.  In her autobiography, which is published in paperback by Tate Publishing this September, Kusama describes her first exhibition:


"I debuted in New York with just five works - monochromatic and simple, yet complex, subconscious accumulations of microcosmic lights, in which the spatial universe unfolds as far as the eye can see. Yet at first glance the canvases, which were up to 14ft in length, looked like nothing at all - just plain white surfaces".

The paintings immediately gained critical recognition and were instrumental in making the artist's name in New York in the 1960s. 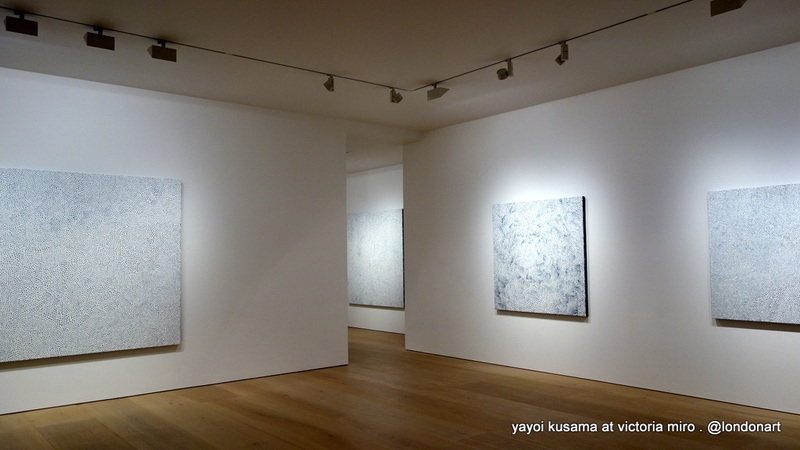 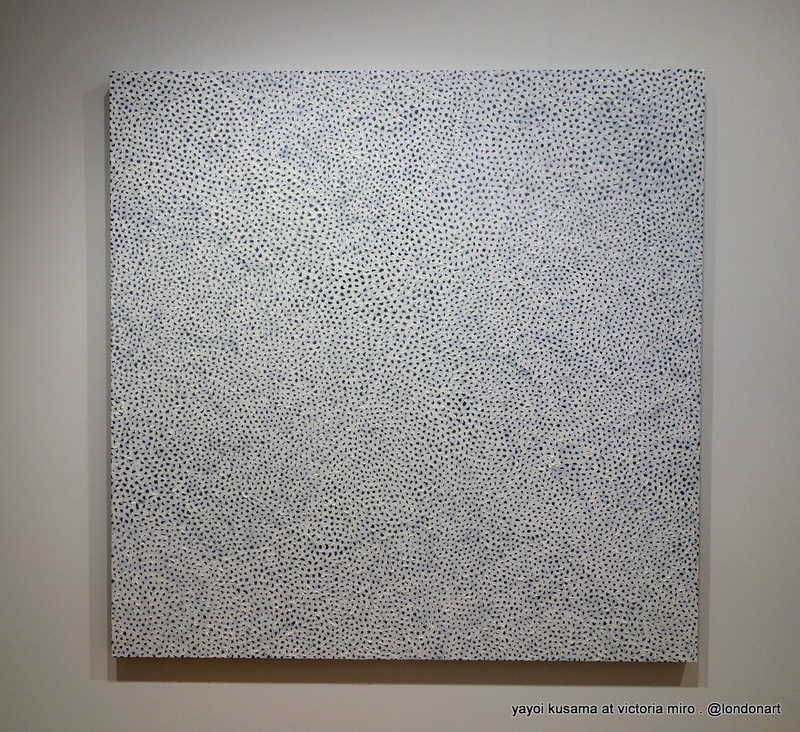 To a certain extent, Kusama's white dots paintings are like a perfect symbiosis of oriental minimalism and western impressionism. While the full canvas is painted with numerous strokes, it remains almost a single entity when viewed as a whole. And when examined in close-up, these strokes come alive with their individuality and interactions with adjacent neighbours. The dynamics of the inter-connected strokes take your eyes through the motion across the whole canvas, and you are free to decide which stream of strokes to follow and explore the infinity landscape. 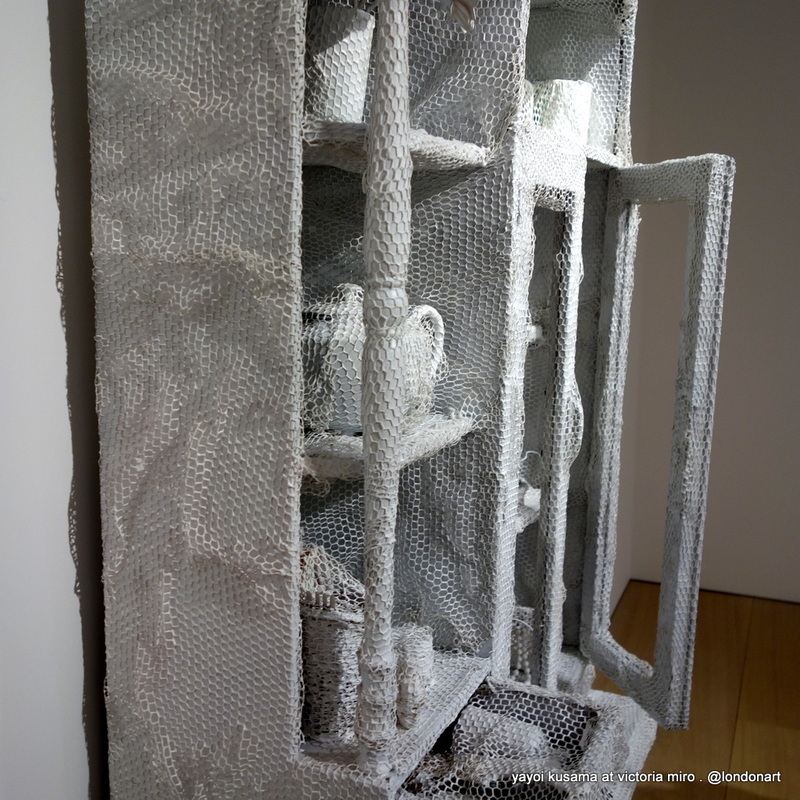 The white net covering the household installation in the second room has a similar effect or, at least the artist's intention, could be attempting to do so. It works partly, but there is an inevitable comparison to another contemporary here - Martin Margiela. One cannot imagine this gallery is not actually a pop-up store of Maison Martin Margiela, which usually features white on white design palette. And Martin Margiela's signature white paint over commodities instantly jumped into mind when we saw this installation in the second room. This unfortunate association has made Kusama's transformation of white infinity nets from 2D to 3D a little less sucessful compared to Julien Opie's facial illustrations.
Full photo set here
*****
The Beautiful Game by Tom Barnett
Hannah Barry Gallery
20.11-20.12.2013
Tom Barnett's exhibition is a completely different experience from Yayoi Kusama's. It is more performance-based. In three acts he brings together his works in the worlds of sculpture, painting, live performance, music, choreography, installation and film. 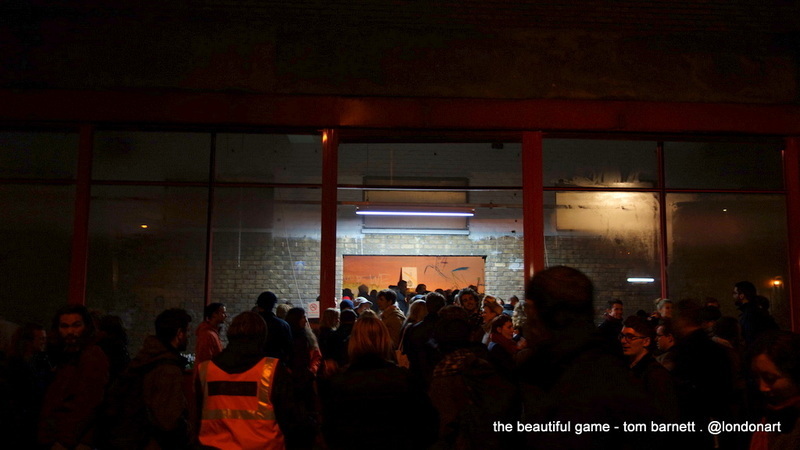 The gallery perhaps was a little under prepared for the crowd showing up for the performance. Staff were asking people to step back to clear the space for the performance to take place, and it has taken well over 15 minutes for the audience to react and re-position themselves around various installation inside the gallery. 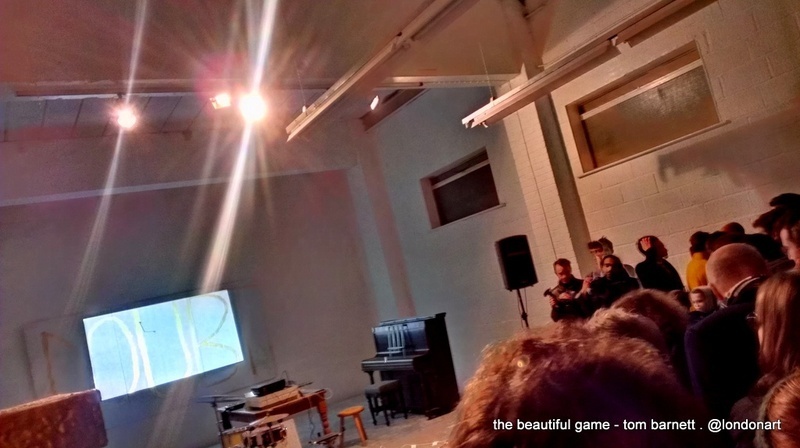 After a bold shot of arrow from a bow to the wall on the projector screen, the performance began. Tom brought along a person wearing an astronaut outfit from the back of the crowd to the front, carrying out several acts involving soil-ploughing, word-painting on the wall, playing drum and piano, singing and reciting text. A footballer and a group of boxers-alike were also present, and performed some impressive football tricks and impromptu sandbag punching. 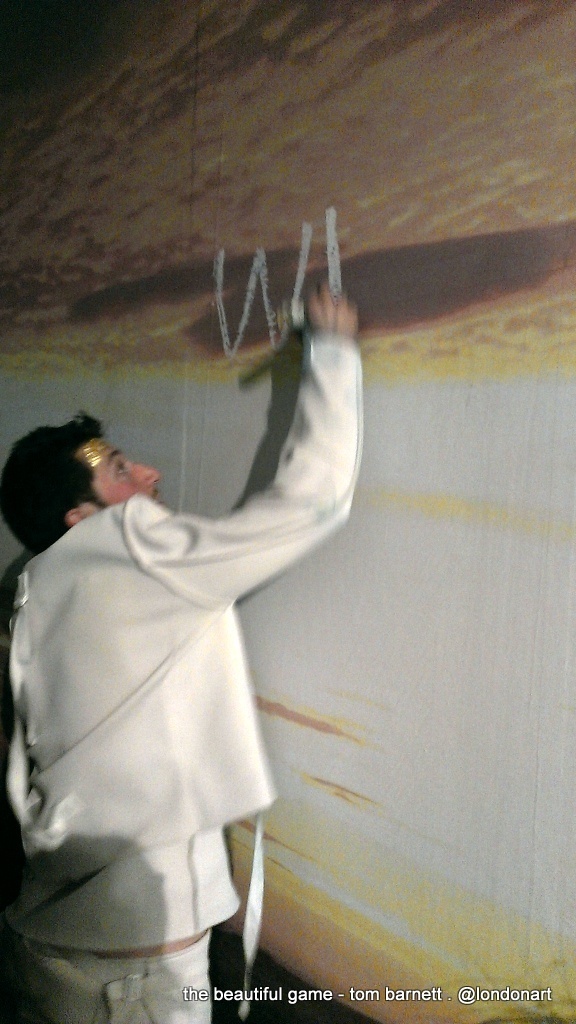 There were quite a few photographers, possibly commissioned by the gallery or the artist's group, taking pictures throughout the show. Perhaps they were also part of the performance group (unlikely). The projector also showed several clips from Youtube during the performance, but it is unclear whether those clips were from the artist or else. The whole performance evoked an autobiographical sense, with the astronaut seemingly exploring the artist's topics of interests. It maybe unfair to say that the whole performance felt like a physical representation of one's facebook wall, as that is what everybody does in reality on facebook. But it did look like a collage of personal experiences.
Overall the performance is an ambitious attempt for both the artist and the gallery to kick off a new venue in a way as such. The atmosphere was good and there were many interesting moments. Time would tell what Tom Barnett brings to the audience in the subsequent acts in this show, and his future career.
Full photo set here