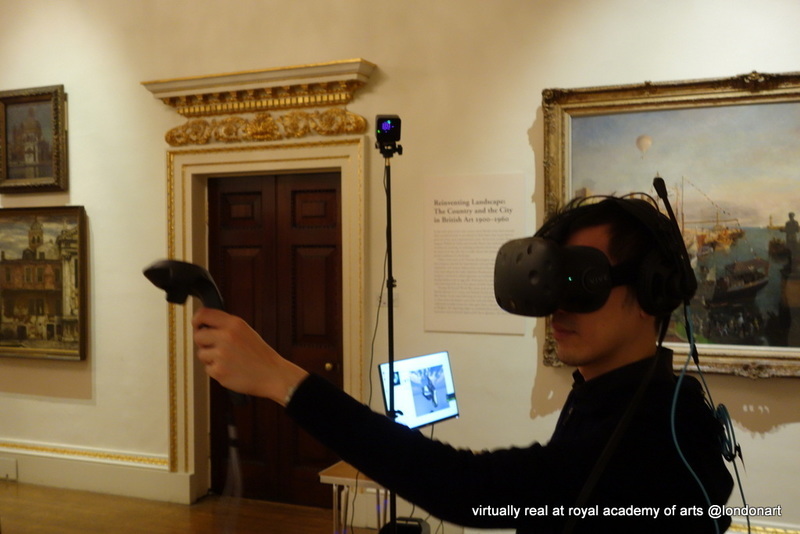 With the mass arrival of VR headsets last year to the consumer world, it is no longer an expensive gadget only for the geeks or professionals. Applications of the technology range from gaming to design, but so far not a lot has been done with fine arts. What will 'VR art' look like? The latest Royal Academy exhibition attempts to give its audience a hint of that in this collaborative project with vendor HTC Vive.

Presented as 'the world's first 3D printed artworks in virtual reality', the exhibition showcases 3 separate pieces of works by 3 artists from RA alumni Adham Faramawy, Ellio Dodd and current third year student Jessy Jetpacks. Apart from the virtual piece inside the headset, there are also 3D printed sculptures on display in the venue, which are featured inside the VR pieces.

Below is a short interview with one of the exhibited artist Jessy Jetpacks - whose piece is probably the least conceptual and most resembling to a traditional video art piece, with the exception that it is a panoramic VR experience instead. The photos are the prototype prints of the 'creatures' featured in the VR film. 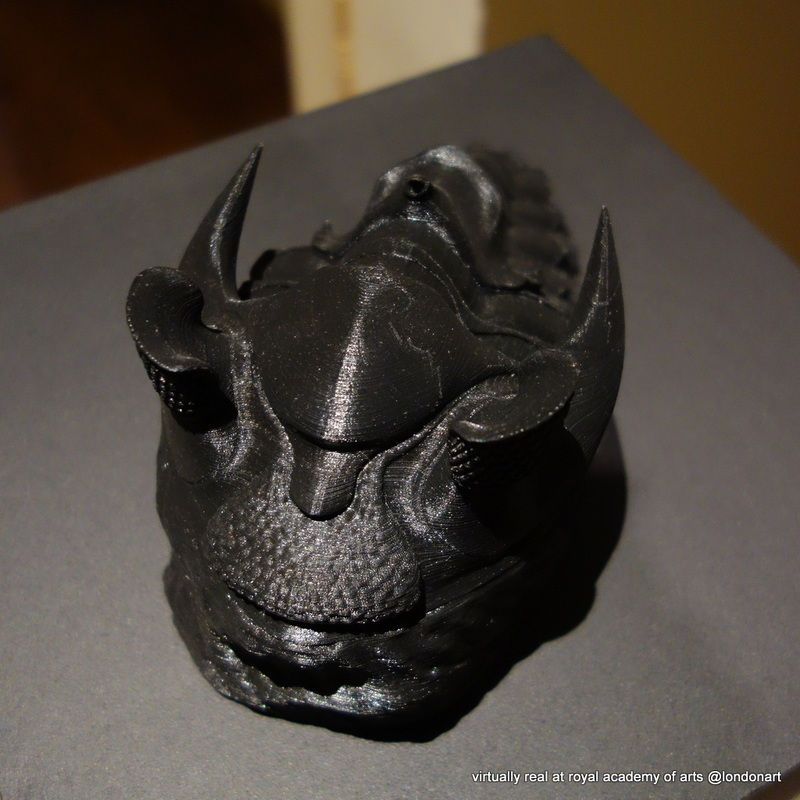 Q1: What is different from creating artwork in traditional media and the VR digital format?


A: What is most different about VR digital format is how it is experienced, not so much how it is created. As a digital artist the process of putting work together is not dissimilar to other projects I have done. Crucially however, you must dip in and out of the immersive environment in order to see how the work is progressing.

A key difference would be freedom from certain costs, and physical restrictions. For instance you can imagine the cost and labour of attempting a fully immersive installation environment in real life. In virtual reality you can play with light, gravity, landscape and scale unbound, but limited to the producible aesthetics of the tool.

Q2: How do you convey your concept to the audience in this exhibition?

A: Because the environment is immersive it can be very manipulative on a base emotional level, doubly so because mine includes specifically composed music. i wanted to use this manipulation in a kind and generous way, so the viewer is free to experience virtual reality without heavily referencing virtual reality or some already established themes of virtual reality e.g. jump-scares, or even certain aesthetics. I designed the simulation to provide constant but not overwhelming stimulation, with sequences of events that happen throughout. I use my enthusiasm and joy, in the form of the martian landscape and giant trilobite herds, a sense of the absurd and comical, with the hoards of dancing women (who are my avatar), also I use the poetic and symbolic within the music and how the whole experience ties together. 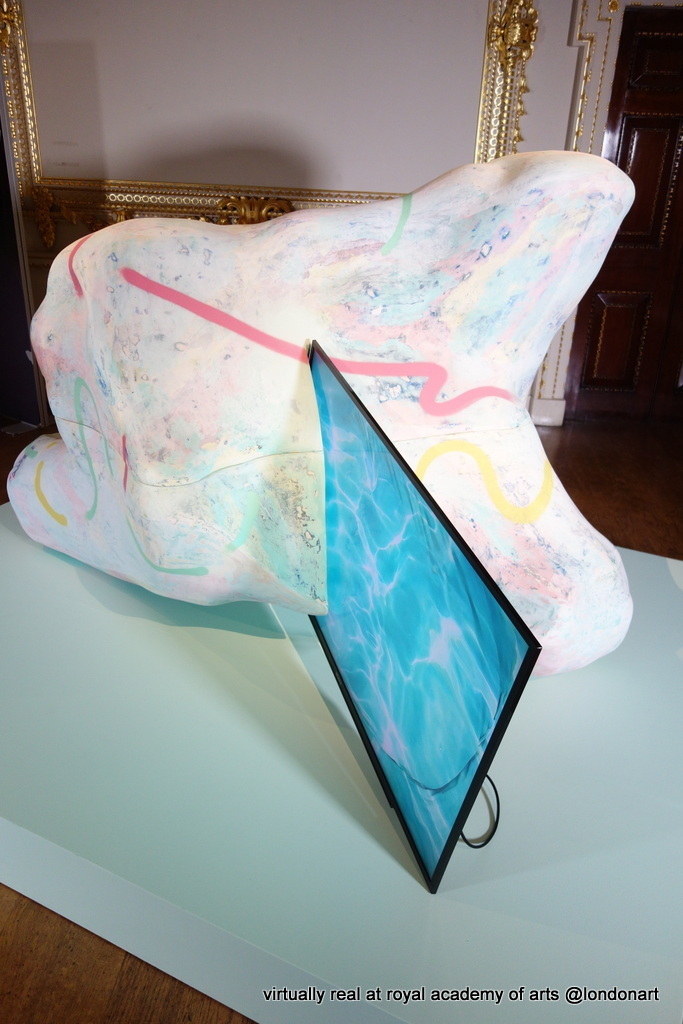 The fundamental difference between the medium or format of these art pieces and the traditional formats such as paintings, sculptures or even performances is that they can only be completely experienced by those who has been equipped with the required hardware. Although one may argue that there are still limitations to how artists can express themselves within the capacity of these hardwares, they have opened up new possibilities of creating and experiencing art undoubtedly. In the piece by Adham Faramawy (shown in above image the physical print on display in the gallery), the visitor can interact in real time with the art piece by spraying colour-changing virtual paint on the 3D sculpture within the virtual space. It is, however, not very clear that what it symbolises in terms of concept other than demonstrating the functionality of the hardware product. The co-creation component, does not seem to have any significance to the art work itself, or one can argue after the excitement, where does the visitor's temporary contribution go into the art piece? 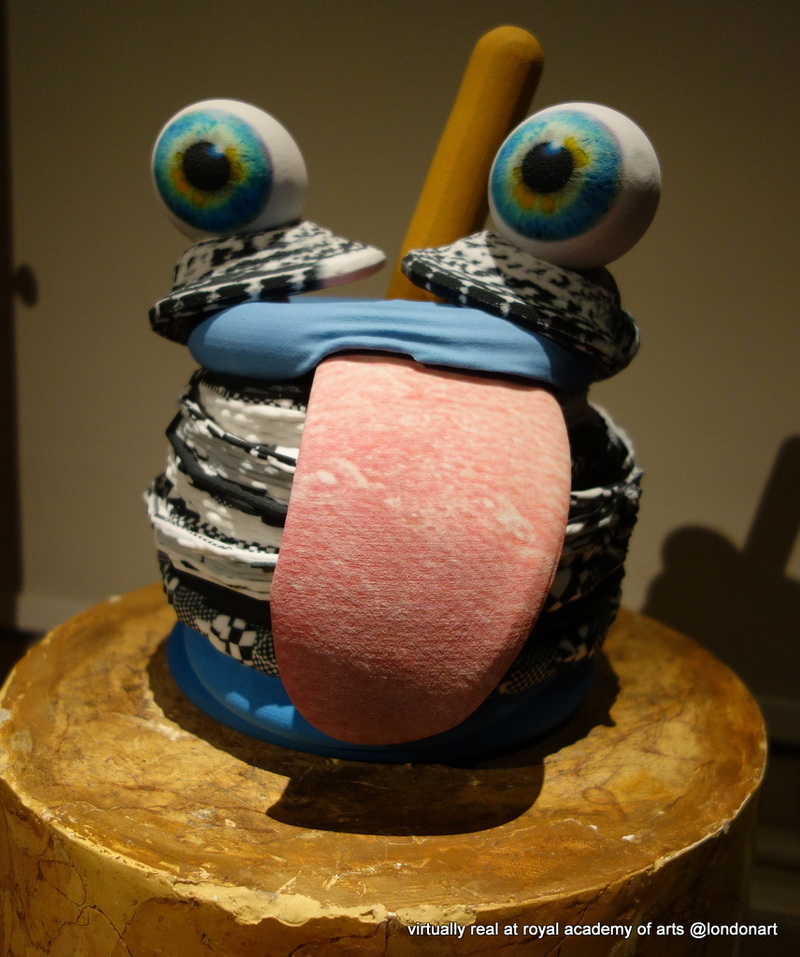 In Elliot Dodd's piece, the visitor enters a space with some sort of pathway connecting one end of a homogeneous environment to the other end which has a centerpiece scultpure, as shown in the above physical print on display in the gallery. The interesting aspect in this piece is that one can walk around in the created space, but also can beam oneself to a certain spot with the way the control pointer works with the hardware. You can also scale the environment up or down to experience it in a different way.

Some may compare this exhibition with Björk Digital in Somerset House last year. While one going to Björk Digital will probably have a certain expectation of what they will see because of the signature style and artistic direction of the singer, it is relatively uncharted territory to those who attended the Virtually Real show, simply because the 3 artists are lesser known in their catalogue of works. Also because they are exploring different possibilities within the technology and their artist direction, it does not have a so-called 'central theme' throughout the pieces, unlike Björk's show which her voice is the common entity that ties all the exhibits together.

Another potential paradigm shift in this development is that for museums and galleries, how do they showcase, collect and archive these art pieces? The usual white box model does not work any more. If any piece becomes hugely popular, there is no way they can simply sell more tickets to let more people in given the limited amount of time and hardware facilities available. So should the museums or artists consider a remote sales strategy similar to Orchestra selling live cast of their concerts online and in cinemas now? Would this open up new possibilities to exhibit in multiple locations around the world simultaneously because one is not limited by the unique physical presence of an art piece any more provided that the works can be 'replicated' across different platforms in different geographical locations in exactly the same way the artist wants it to be?

When the internet was first born, few people knows what to do with it and we are only realising its real potential in recent years. It is, perhaps still early days for artists to truly realise the potentials virtual reality can bring to artistic creation. And the end products, will definitely not look the same as the art works we have been seeing in the past centuries, just like an instant message with emojis is not the same as a letter written by hand in ink.

Further Readings -
Official page for the exhibition
Interview with Adham Faramawy by alphr.com, 13.01.2017