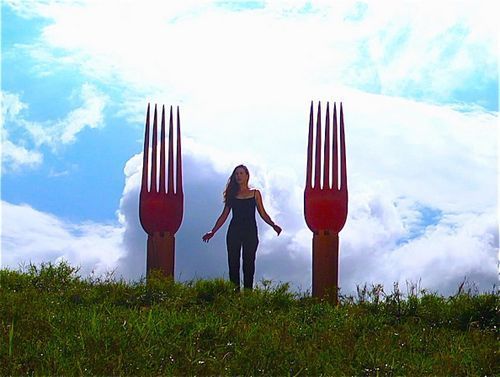 Q1: You were born in Jamaica and you are obviously inspired by your heritage. You are also known for exploring issues surrounding suffering, recovery as well as the natural environment. For you, what makes Jamaica and where you live, such an important part of your ‘voice’?

LF: The consequences of colonialism and the draconian brutality of slavery will play out for centuries to come.  The work of artists, such as myself, is pivotal in creating a dialog that commences a process of healing the psychological trauma that we have  inherited. 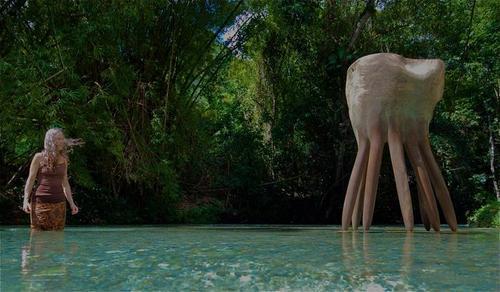 Q2: “Redemption Song” is a stunning monument - the figures seem to ‘weigh heavy’ and like two mythological figures, they rise ‘proud’ out of the water. Can you tell us a little about the background and inspiration to this piece?

LF:  For a society to not only endure but survive the horrors of slavery requires supreme inner strength and psychic fortitude.  I wanted my figures to not only portray the quality of endurance that is part of our culture, but more importantly a pride in the conquering of adversity.   The placement of the figures in water symbolises a psychic cleansing and emergence into a new era. 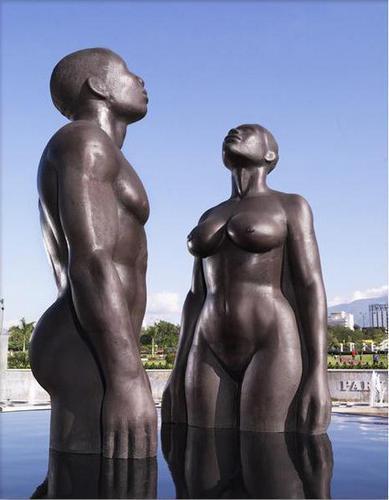 Q3: What is your biggest challenge as an artist?

LF: Creating a space within which I can develop a subliminal connection with the forces that surround me.  Maintaining a studio, within the context of a working farm, is a constant challenge, there are many demands that pull my attention away from the thread of knowledge that runs into and through every work that I create. 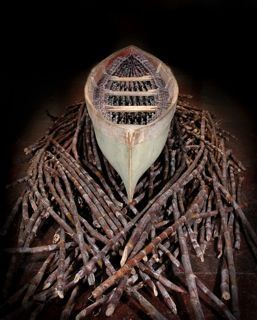 THEIR SPIRITS GONE BEFORE THEM

Q4: Can you tell us a bit more about ROKTOWA and why you are involved?

LF: ROKTOWA’s genesis began when Melinda Brown moved her studio from downtown Manhattan to downtown Kingston in 2005.  For decades people had talked about the need to place artists downtown, then out of nowhere, this Australian artist appeared and became embedded in the downtown community. From her experiences and observations of the dire economic conditions experienced by downtown residents, the concept for ROKTOWA emerged.  ROKTOWA is predicated around an Artists Residency program that allows both foreign and local artists to engage with the downtown community; by placing artists with tradesmen we have been able to create export quality products. ROKTOWA’s Mission is to: Plant Artists to Create Growth. We create both Fine and Applied Art, by expanding the visual and design vocabulary of the skilled workers downtown.

Q5: You are having a solo exhibition in the UK, “Radiant Earth” at the Prince’s School of Traditional Arts. Did you choose this title? Why in particular? What will be the nature and feeling of the work on show?

LF: Yes, RADIANT EARTH, is my first solo show in the UK, it’s a retrospective of the last decade of my work and shows my departure from a more literal and figurative style to the metaphors that have appeared to me and emerged in such forms as liquid needles, hovering plumb bobs and yes, combs.  My last show was titled Radiant Combs and I was lucky enough to have a Trinidadian filmmaker, Mariel Brown, approach me to film the sculptures, the footage recorded was compiled under the working title “Radiant Earth”.  The farm where I live is truly Radiant and each day I am compelled to translate and reflect that radiance.

6. What do you hope to achieve with this solo retrospective?

LF: I am excited about the possibility of commencing a dialogue with the Art World in the UK.  Jamaica has allowed me the freedom to explore and create my own
language.  However, given our small population, we do not have Gallery Directors or a commercial gallery system.  I am looking forwards to cementing a relationship
with a Gallery and in the process connect with Artists and Dealers with whom I can engage and commence an on going relationship.